The SS Viper was a steamship that served as a troop carrier in the English Channel during the First World War.  She was used mainly for trooping duties between the Kent ports, Southampton and the main French port serving the British Expeditionary Force at Le Havre (where Ernest himself disembarked).

She was originally built as a passenger ship in 1906 by the Fairfeild Shipbuilding & Engineeering Co. in Govan and plied the Ardrossan-Belfast route between Scotland and Ireland both before and after the war. In this incarnation she had accomodation for 1,700 passengers and a crew of 61.

After the war the Viper returned to its pre-war route, but the increasing unrest in Ireland and concomitant reduction in passenger volumes meant that the Viper was sold to the Isle of Man Steam Packet Co. in 1920 for £120,000 and renamed Snaefell.

Snaefell was temporarily pressed into service again as a troopship in WWII for a year but served out most of that war acting as the link between the Isle of Man and Liverpool. In 1945 the vessel was finally withdrawn from service and sold for breaking, being finally broken in 1948.

The early pages of Ernest’s diary include lists of addresses, including reference to two other servicemen who were located on HMS Redoubtable and HMS Monitor.

HMS Redoubtable was already an old ship, having been first commissioned in 1892 as HMS Revenge, a battleship of the Royal Sovereign class. At the start of the war she was laid up , awaiting disposal, but was recommissioned in 1915 to bombard the Flanders coast. The ship was renamed HMS Redoubtable later that year when she was converted to an accomodation vessel, but not before she became the first operational ship to be fitted with anti-torpedo bulges. After the war she was sold for breaking in 1919 for £42,750.

HMS Monitor was newly launched in 1915 and is the one of the three ships that still exists. She is the sole remaining British veteran of the 1915  Gallipoli Campaign and the only British warship from the First World War that is open to the public.  More details on this ship, including how to visit her, can be found here: http://www.nmrn.org.uk/node/1508 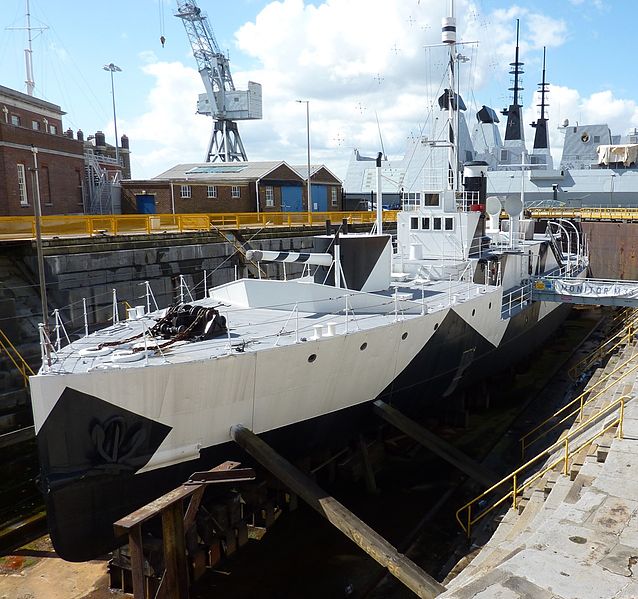 HMS Monitor M.33 in 2010 in drydock at Porstsmouth, after restoration and painting in dazzle camouflage